The high diversity of tropical plant communities is an enduring mystery, and a range of hypotheses have been proposed to explain it. In a new paper, Tak and Ryan evaluate the plausibility of the prominent Janzen–Connell hypothesis, which proposes that tropical plant diversity is maintained by selection against common species via impacts of natural enemies. Using a modelling approach informed by data from tropical forests in Panama, they find generally weak support for the hypothesis, with high diversity being maintained only in the idealised case where all species are equivalent. The paper has just come out online at The American Naturalist, and will be published in the forthcoming November issue. The lay summary and Abstract from the journal website are reproduced below.

R. A. Chisholm & T. Fung. 2020. Janzen–Connell effects are a weak impediment to competitive exclusion. The American Naturalist (in press)

UPDATE (December 2020): Our paper has been recommended on Faculty Opinions (formerly F1000). 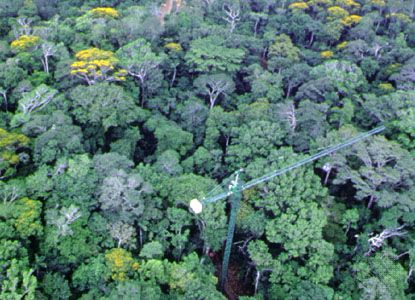 A tropical forest, such as this one at Fort Sherman, Panama, can contain over 100 tree species within a single hectare. (Marcos A. Guerra/Smithsonian Tropical Research Institute)

Are pests and pathogens responsible for high tree diversity in tropical forests?

Step into a tropical forest and before long something will attack you. A mosquito bites you, a tick latches on, a chigger bores under your skin. You sit on the ground and get a nasty case of worms. Eventually, fungi eat away at your clothes. Such pests and pathogens can make life difficult—not just for humans but for plants and other tropical forest organisms as well. But could these “natural enemies” in fact be essential to the ecosystem, by preventing any one species from getting the upper hand? In a new study, two ecologists from the National University of Singapore tested this idea for tropical forest trees by building mathematical models in which each tree species is attacked by its own specialised enemy. In real tropical forests, there can be dozens or hundreds of tree species in a single hectare. Did their model produce similar diversity? The answer in general was no. Only in a very special case, the ecological equivalent of a pin landing on its head, did they e get such high tree diversity. This special case was when all species were equivalent—they all had the same death rate, same birth rate, and so on. Because pins generally do not land on their heads in nature, this scenario is implausible. The idea that pests and pathogens, through their voracious activities, can maintain forest diversity is vivid and appealing, but it does not stand up to scrutiny. The quest for a rigorous explanation of tropical forest diversity continues.

A goal of ecology is to identify the stabilizing mechanisms that maintain species diversity in the face of competitive exclusion and drift. For tropical forest tree communities, it has been hypothesized that high diversity is maintained via Janzen–Connell effects, whereby host-specific natural enemies prevent any one species from becoming too abundant. Here, we explore the plausibility of this hypothesis with theoretical models. We confirm a previous result that when added to a model with drift but no competitive exclusion, i.e., a neutral model where intrinsic fitnesses are perfectly equalized across species, Janzen–Connell effects maintain very high species richness that scales strongly with community size. However, when competitive exclusion is introduced, i.e., when intrinsic fitnesses vary across species, the number of species maintained by Janzen–Connell effects is substantially reduced, and scales much less strongly with community size. Because fitness variation is pervasive in nature, we conclude that the potential of Janzen–Connell effects to maintain diversity is probably weak, and that the mechanism does not yet provide a sufficient explanation for the observed high diversity of tropical forest tree communities. We also show that, surprisingly, dispersal limitation can further reduce the ability of Janzen–Connell effects to maintain diversity.