From 11 to 22 September, Tak visited collaborator James O’Dwyer and his lab at the University of Illinois at Urbana-Champaign. During the visit, Tak interacted with James and members of his lab, including his two post-docs Rafael D’Andrea and Mario Muscarella, as well as his three graduate students Alice Doucet Beaupré, Stacey Butler and Nick Sutton. There were fruitful exchanges between James, Rafael and Tak on developing a size-structured version of a neutral model, which has been found to give species-abundance distributions with a power-law form under certain scenarios. They explored possible extensions to a recent paper on this topic (D’Andrea & O’Dwyer, 2017), including application to dynamics of the frequencies of human names (O’Dwyer & Kandler, in review). The visit also provided a good opportunity for Tak to learn more about the work being done in James’s lab, which is at the forefront of theoretical ecology and evolution.

In addition, Tak presented a seminar on recent work he had been involved in, which is to do with extending neutral models to include random differences in species demographic rates, in a parsimonious way. These random differences could represent species-specific responses to changes in environmental conditions. Incorporation of these differences into neutral models can explain a greater number of biodiversity patterns in tree communities, especially patterns that incorporate changes over time. Tak received constructive and insightful feedback during the seminar. Furthermore, Rick Condit visited the O’Dwyer lab for one day and this enabled mutually beneficial exchanges between Rick, Tak and members of the lab on mechanisms sustaining patterns of biodiversity in tree communities. Rick also gave a seminar on new work that he has done on drivers of patterns of beta-diversity in Panama, which generated lively exchanges. 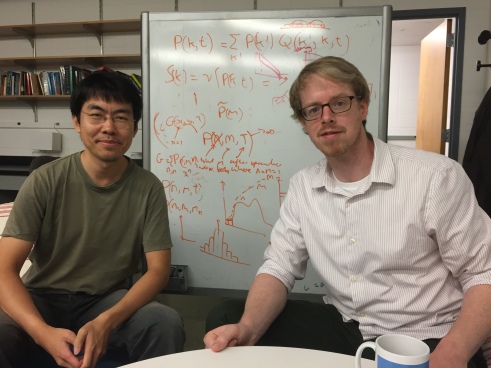